With the UK vaccination rate now past 20 million and home schooling at an end, spring has arrived and supply in the residential property market is likely to pick up.

However, while March will be a pivotal month, February continued January’s theme with more buyers chasing fewer houses, as sellers bided their time.

This temporary imbalance appears to be supporting pricing. Nationwide reported an increase in prices last month of 0.3% between January and February. It took annual price growth to 6.9% from 6.4% in January.

Halifax recorded a month-on-month decline of 0.1% in February, although house prices remain 0.5% up on a quarterly basis and 5.2% ahead of February 2020.

The extension of the stamp duty holiday in England and Northern Ireland until June and subsequent taper into the autumn, is likely to encourage sellers to act sooner rather than later in order to benefit from the saving. The Budget this month also saw the chancellor announce a guarantee scheme for 95% mortgages from April to help people with smaller deposits get on the property ladder.

Scotland has confirmed that its Land and Buildings Transaction Tax holiday will end as planned on 1 April.

While the strength and speed of the UK’s economic recovery from the Covid-19 pandemic remains unknown, there are green shoots. The Office for Budget Responsibility (OBR) has responded by upgrading its forecasts for housing market activity, economic growth and unemployment as the UK’s successful vaccine roll-out continues.

The OBR forecasts an increase of 2.8% in residential property values over the following 12 months, which compares to a previous prediction of a 5.6% decline. GDP is expected to grow by 4% in 2021, down from 5.5% due to the impact of the third national lockdown. However, economic output is expected to recover to its pre-pandemic level in the second quarter of 2022, six months earlier than previously expected. Unemployment will peak at 6.5% rather than 7.5%.

Prices in the prime central and outer London property markets continued to recover from the impact of the pandemic.

There was quarter-on-quarter growth for the seventh consecutive month in prime outer London in February, demonstrating how demand for more space has driven suburban property markets in the capital.

Prime central London is in more of a holding pattern, with prices flat in the three months to February due to restrictions on international travel. The annual price decline was 4.4% in February. Most of this decline was recorded in the early months of the pandemic and average prices have only fallen by 0.1% since the market re-opened last May.

To understand why rental values in prime London markets have fallen over the last year, the chart below encapsulates what is taking place. 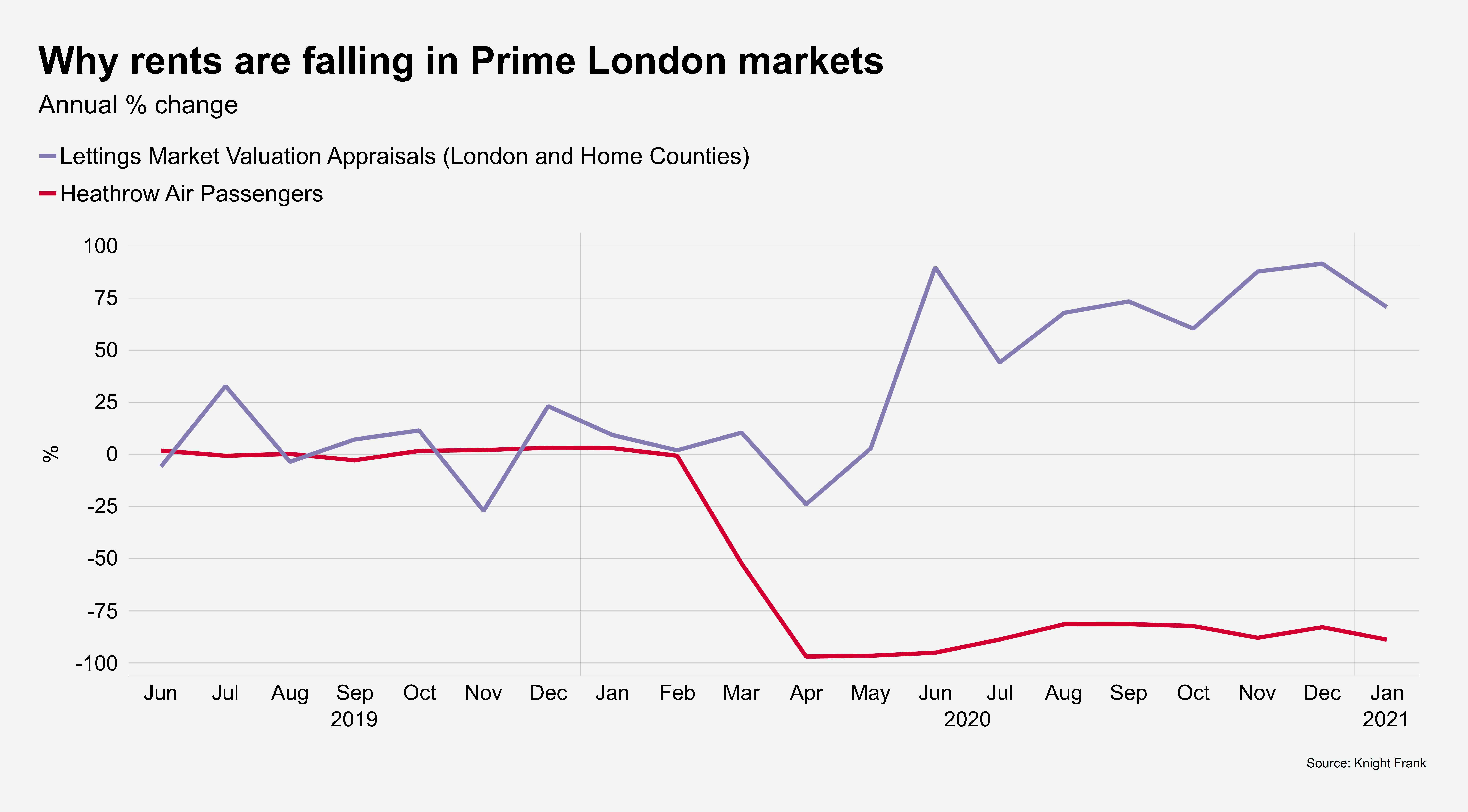 Demand from international students and corporate tenants has fallen, which is underlined by the fact passenger numbers through Heathrow are down by between 80% and 90%.

Meanwhile, a high level of short-let properties transferring to the long-let market has driven supply higher, which explains why market valuation appraisals are up by two-thirds on last year. With the likely return of staycations this year, there are early signs that this trend may have only months left to run.

While market value appraisals remained below the five-year average in the final week of February, the gap has narrowed throughout the month and fell back to -23% in the week ending 27 February. Viewings were positive for the first time this year in the same period, up 7%. Prospective buyers and offers accepted were up 50%, while exchanges were up 80% in the week ending 27 February versus the five-year average, underlining the momentum that remains in the country market.

With PWC, Virgin Media, Lloyds and Deutsche Bank, among those companies reported to be exploring hybrid working post-pandemic, the escape to the country trend doesn’t look to have run its course yet – as our recent Sentiment Survey shows.

One beneficiary of the presumption that hybrid working will be adopted has been East Anglia, with the prospect of increased working from home and less commuting leading to a revaluation of the region, which made it the top performer in the Prime Country House Index last year with price growth of 17.6%.