There is a supply shortage in some parts of the UK property market. In a similar way to other trends over the last 12 months, it is a short-term distortion.

Parts of the UK property market face a supply shortage.

There were a quarter fewer properties listed for sale in England and Wales in March this year compared to 12 months ago, OnTheMarket data shows.

Further analysis reveals how the imbalance has been caused by the pandemic rather than anything endemic.

First, the shortage is a problem facing the house rather than the flat market. The number of houses listed for sale was 33% lower over the 12-month period while the number of flats was 7% higher.

Second, it is more acute in parts of the country that have experienced stronger demand due to successive lockdowns. Among the house listings, the number was 3% down in London compared to a drop of 42% in south-west England.

So, why has it come about?

Part of the problem relates to the first two months of this year. January and February were marked by uncertainty over new Covid variants and the vaccination programme was in its early stages. On top of that, many parents were home-schooling. All of which meant new sellers were reluctant to list their property and we are seeing the effects of that now.

When demand escalated sharply in March, supported by the original stamp duty deadline at the end of the month, the best properties sold relatively quickly.

As those properties went under offer, sellers hesitated as they were unable to find anywhere to move into themselves, exacerbating the supply shortage and putting upwards pressure on prices.

“The current supply shortage represents a bumpy exit from the pandemic and tells us very little about how the property market is going to perform over the next 12 months,” said Tom Bill, head of UK residential research at Knight Frank. “The last year has shown the importance of looking beyond short-term distortions in the property market.”

One reason to believe the imbalance will correct is that the number of market valuation appraisals is rising, as the chart below shows. Appraisals take place when owners want to know the market price of their property before listing and is a leading indicator of supply. 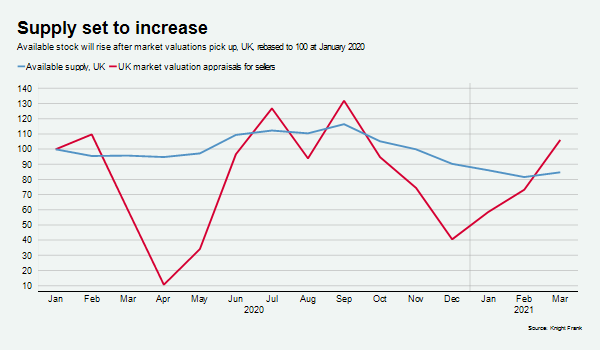 While the supply of houses fell by a third in the year to March, there was a 22% increase in the number of them going under offer.

If the UK wasn’t emerging from a pandemic, you could argue this signalled a period of strong price inflation followed by a possible correction. However, downwards pressure on prices will return as supply increases.

In the meantime, property prices are not becoming detached from their underlying value in a meaningful way, the sign of an asset price bubble.

The market is certainly moving more quickly due to the lack of supply. The average number of days between listing and going under offer was down by a third in Q1 2021 compared to the same period last year.

However, there has been little evidence of exuberance around prices against the backdrop of the global pandemic. The number of properties that exchanged below the guide price was 68% in March this year, compared to 74% last March. The rest were at or above the asking price.

It is evidence of some short-term upwards pressure on prices but little else.