What happens when the stamp duty holiday tapers from next month?

Three things can be said with a fair degree of certainty about the stamp duty holiday, which tapers from the end of this month.

The first and most obvious is that June is going to be an exceptionally busy period for the UK housing market. Second, any fall in activity during July and August will be noticeable. The third is that the subsequent rebound will be strong.

From July, the maximum stamp duty saving falls from £15,000 to £2,500 and will remain at that level until the end of September.

The holiday, which will have been in place for a year on 8 July, was introduced to benefit the wider economy during successive lockdowns and has helped to drive activity.

The total amount spent in the UK housing market in the year to March was the highest since before the global financial crisis.

Against the backdrop of falling supply, strong activity levels have also contributed to rising house price inflation. The Nationwide reported that UK prices climbed 10.9% in the year to May, the highest annual rate since August 2014.

So, what does a closer look at the data tell us about what happens after the end of this month?

Based on the number of offers accepted in May, what follows is not difficult to predict. It was the highest UK monthly figure for 10 years and 55% above the same month in 2019. Transaction volumes will clearly be high as people attempt to complete before the end of June.

While many will renegotiate the price if the deadline is missed, most will do what they can to complete this month.

The same is true to some extent in prime markets, where the saving is proportionally smaller. Buyers would rather save £15,000 than make an equivalent payment to HMRC.

The number of transactions in prime central London reached a five-year high in March, which was the month of the original stamp duty holiday deadline. Sales volumes declined by a third in April before picking up in May, underlining how the holiday has set the tempo in all price brackets of the housing market.

We can therefore expect a fall in trading in July as more transactions are squeezed through in June. The return of seasonality as more people take a summer holiday means August is also likely to be quiet compared to June.

The reason activity should recover strongly after the summer is the amount of frustrated demand that will be left in the market.

The other record broken in May was the number of viewings per available property hitting a ten-year high, as the chart shows. 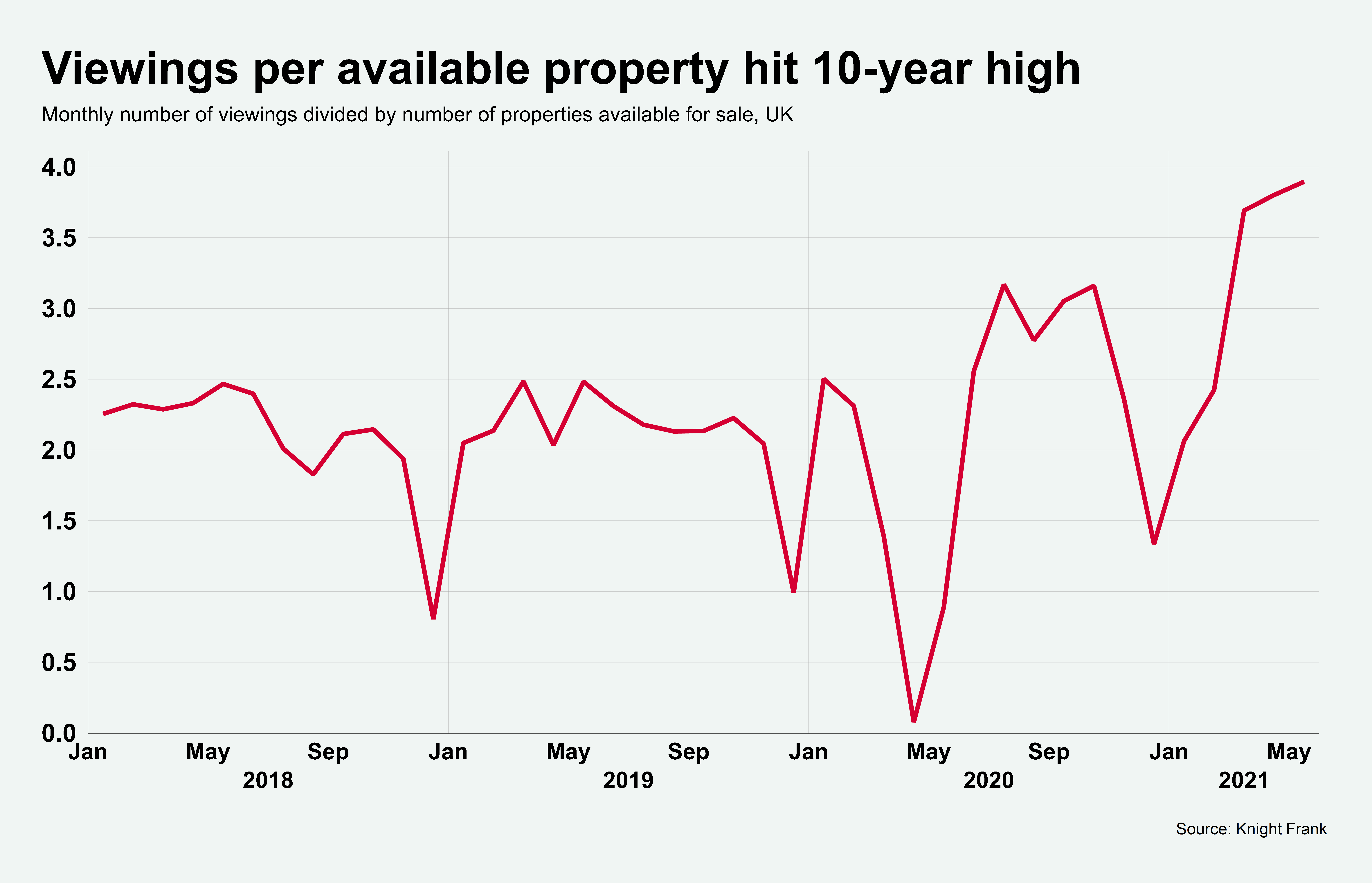 A number of those people who viewed in May won’t be able to complete before the June deadline, creating pent-up demand.

Properties are also going under offer more quickly, which has added to a sense of frustration. The median number of days between listing and going under offer in England and Wales in May was 17, according to OnTheMarket. It was the lowest figure in a year and compares to 38 six months ago.

Furthermore, demand is already high compared to recent years. The number of new prospective buyers registering in the UK between January and May was 40% higher than the same period in 2019.

This was due to a wider reassessment by buyers and sellers of how and where they lived during three national lockdowns, many of them deciding to act following a subdued six-year period against the backdrop of Brexit.

The stamp duty holiday has amplified demand but, with the benefit of hindsight, we know activity would have been strong without it. It would just have been more evenly spread throughout the year.