Fast broadband and more space in demand, as most look to work from home more often, survey finds

Most buyers that missed June’s stamp duty holiday deadline would not have abandoned deals, based on Knight Frank’s latest sentiment survey.

Asked ahead of the stamp duty deadline on 30 June what they would do if they missed the date, just 5% of respondents said they would pull out of their purchase.

While most said they’d simply continue with the deal (59%), more than two-thirds (36%) said they would look to renegotiate the purchase price. 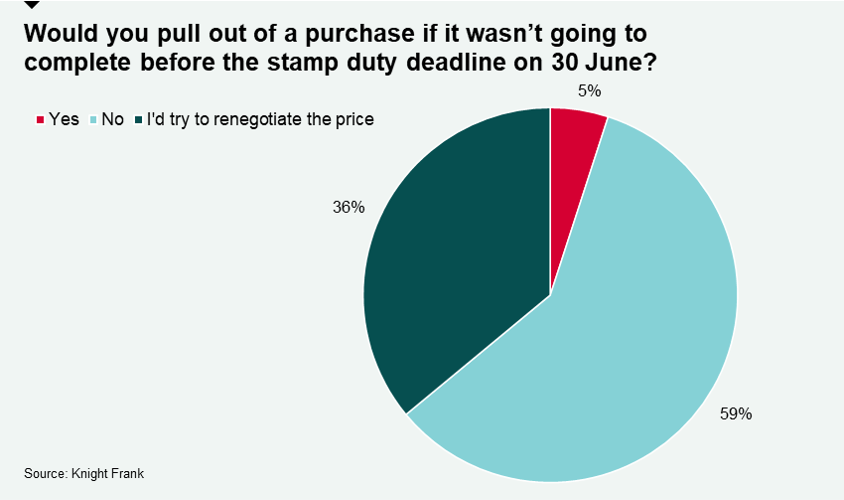 From the 30 June the threshold that stamp duty is paid at on a residential property purchase in England and Northern Ireland was reduced from £250,000 to £125,000. Consequently, the maximum saving under the holiday has fallen from £15,000 to £2,500 until the end of September.

Current data suggests June will be a record month for the UK property market. Knight Frank carried out the highest number of UK transactions on record last month surpassing the record set in March and the original end date for the stamp duty holiday.

Knight Frank saw a record number of offers accepted in the UK in June and pent-up demand is likely to underpin activity despite an expected fall in transactions following last month’s stamp duty deadline. Supporting this, close to a third of survey respondents said the UK’s latest lockdown had made them more likely to move within the next year.

Meanwhile, three-quarters of respondents believe the value of their home will increase within the next year, despite the end of the stamp duty holiday. The increase is a jump from the 51% that believed the same in February. Just 9% expect prices to fall in the next twelve months – consistent with the view of the main house price indices.

Close to half (46%) of people surveyed believe the value of their home will increase by between 1% to 5% in the next year, compared with 37% in February. Just over two-thirds believe any increase will be within the single digit range. 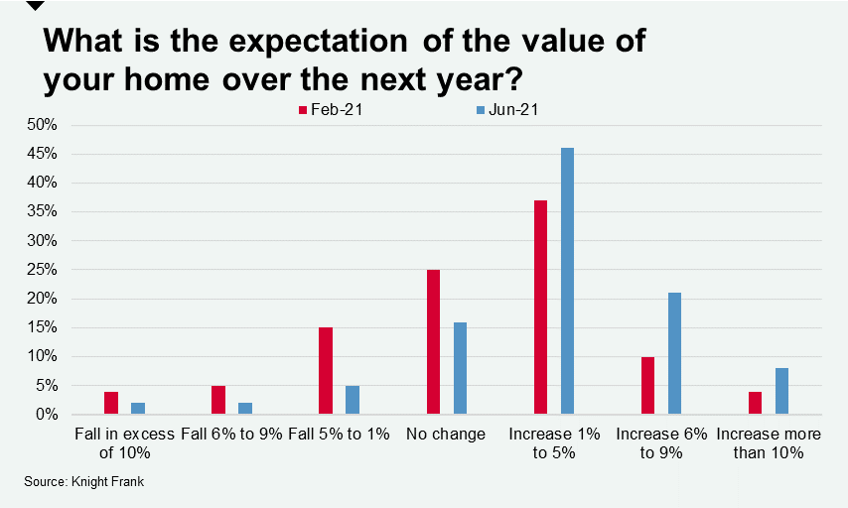 This is in line with our own growth forecasts for the residential property market. We expect improving supply and continued strong demand following the end of the stamp duty holiday will reduce price growth from double to single digits towards the end of the year.

Annual house price inflation reached its strongest level since 2004 in June at 13.4%, according to Nationwide. The lender said underlying demand will remain strong in the short-term due to tight supply, before likely softening after September after the stamp duty holiday expires. However, while the holiday has brought transactions forward it is not the only factor behind the market’s momentum, and buyers search for space is far from over.

Space has been a key driver in the residential property market since the pandemic. 69% of respondents want to purchase a detached house, with second-hand, as opposed to new build, the first choice for 58%.

Regarding location, moving to a village was the most popular choice (46%), although in second place was city living (20%). There was a distinct age divide too, with older buyers clearly favouring an escape to the country, while those under the age of 40 were keenest on urban locations.

The commuter belt continues to be redrawn due to home working and the adoption of hybrid working models. More than half (54%) of survey respondents said they are looking to work from home more frequently than they did before the pandemic. However, the impact this will have on the property market is likely to be nuanced, with working from home most popular amongst those based in London.

Perhaps unsurprisingly given the momentum behind home working, asked, ‘when thinking about a home, how important are the following factors to you now compared to before the pandemic?’, access to high-speed broadband was the single most popular category overall with 61%.

A garden, outdoor space or access to land was important for 57% of respondents, and the second most popular option overall. A home office or study was third with 53%.

However, for those based in London, outdoor space and a home office were the two most important factors, with broadband third, something that has seen greener and more suburban areas of the capital perform well over the pandemic.

Proximity to pubs, restaurants, theatres and entertainment has gained in popularity following hospitality’s reopening, and 31% said this was now more important compared to just 18% at the start of the year.