The end of the stamp duty taper next week will bookend an extraordinary period for the UK property market and usher in a return to normality.

However, while the direction of travel suggests seasonal patterns will re-establish themselves after a white-knuckle ride that reached its peak ahead of the 30 June stamp duty deadline this summer, demand remains high and supply stubbornly tight suggesting a gradual process of normalisation.

However, not everything will revert to how it was. While there is renewed interest in more urban living and a growing demand for lettings property in London as offices reopen and students return, the pandemic means the new normal won’t be a facsimile of what came before.

The second homes boom that began after the first lockdown in 2020 isn’t over, and more buyers than ever have opted for the attractions of a second home, motivated by a series of lockdowns.

Consistent with reports of a booming second homes market in South West England during the year of the staycation, the number of transactions liable for the second home 3% stamp duty surcharge hit a new high of 84,700 in the second quarter of this year.

The number will also include buy to let investors taking advantage of the stamp duty holiday but it is nevertheless the single largest quarterly figure since the Higher Rates for Additional Dwellings (HRAD) surcharge was introduced in 2016.

The trend is certainly boosting the coffers of the government, as the chart below shows. The surcharge contributed £485m of the £2.06bn of residential stamp duty collected in Q2 2021, which was the largest slice (24%) on record. It was also the largest contribution by value since Q4 2017. 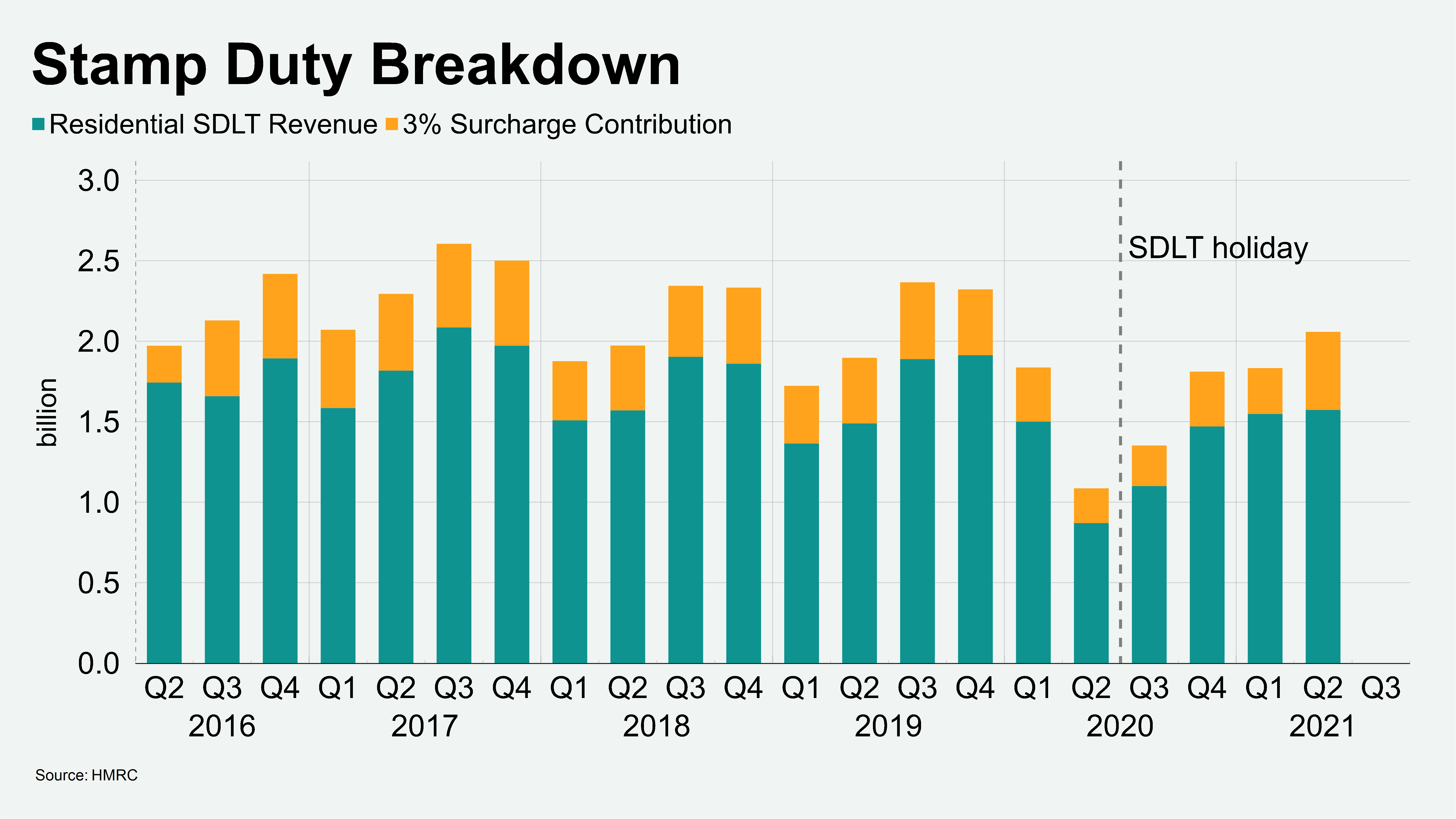 “I’m not surprised, people have been much more driven to purchase,” said Mark Proctor, head of the South West region at Knight Frank. “They were unable to travel overseas last year, and the lack of freedom of movement left many wanting somewhere to retreat to outside of cities,”

“Being told to work from home has enabled people to realise their lifestyle ambitions via a second home, and with the equity that’s built up in the London and the South East property markets over the longer term, that five-year plan to buy a second home has come forward considerably for many buyers.”

Second home purchases outside of London increased by 83% in the first eight months of 2021 compared to the five-year average, according to Knight Frank data.

The rise was in the Central region was 58% over the same period, bolstered by a recent focus on the Chipping Norton region of the Cotswolds in the TV show Clarkson’s Farm.

“Clarkson’s Farm is referenced by almost everyone we meet in the area,” said Damian Gray, head of Knight Frank’s Central region. “It has put the village and surrounds in the spotlight.”

Meanwhile, second home purchases in the South West, which is more of a traditional target, doubled in the same period.

It is not just a UK phenomenon. According to Knight Frank’s Global Buyer Survey 2021, 33% of international buyers are more likely to buy a second home as a result of Covid-19. However, consistent across borders is the current challenge of matching supply with demand – something that will support pricing but could limit volume.