Boomerang buyers return to the capital

Boomerang buyers return to the capital

A London bolt-hole has risen up the list of requirements for those who made the move to the country during the pandemic.

Many assumptions were made at the height of the pandemic that didn’t stand the test of time.

Unemployment was expected to climb to double digits. In fact, the furlough scheme ended last week with unemployment standing at 4.6%.

Others bought a home outside of London in the belief that the daily commute was a thing of the past.

Some 18 months on, there is no prevailing consensus but the direction of travel is back into the office. It means those who moved outside the M25 now face a more regular and lengthy commute and their need for a London base has become more pressing.

As a result, the number of new prospective buyers registering with Knight Frank outside the capital looking for a London flat has spiked in recent months, no doubt spurred on by the stamp duty holiday.

In Q3 2021, the group represented 9.5% of the total, down slightly from 10.4% in the second quarter of this year. The ratio had not previously exceeded 3% over the course of the pandemic, as the chart shows. 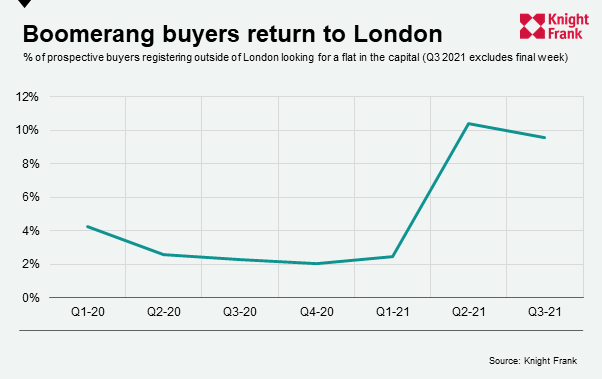 “The vast majority of buyers coming from outside of London are looking for a bolt-hole rather than to up sticks and return to the capital,” said James Clarke, head of London sales at Knight Frank. “All of a sudden, that daily commute looks a bit tougher as the need to be back together in the office becomes more apparent.”

“In rare cases, some are doing a complete 180 and coming back to London but the last time I heard of someone doing this, they also made a six-figure sum on their country property.”

“What we are seeing quite clearly is that people want the advantages of the Country and London,” said James Cleland, head of Knight Frank’s country business. “The genie is very much out of the bottle for many people who now appreciate the advantages of living outside the capital.”

“There is less competition for schooling and some people prefer it as an environment for kids to grow up,” said James Clarke. “Those looking back in London are focussing on areas like Belsize Park, Queen’s Park and south London markets like Wandsworth.”

The ‘escape to the country’ was one of the defining stories of the pandemic, but it was merely the opening chapter of a bigger story. As second home ownership rises, housing equity and any associated affordability pressures, would become more geographically dispersed around the UK.

This increase in second homes, alongside a growing pot of stamp duty revenue raised from the 3% surcharge, is something we explored in more detail last week.

The return to the city is something we saw take place in the rental market at the start of this year as tenants took advantage of falling rents. The reality of long-distance commuting means more buyers have now joined them.