Dividing global growth, balancing the UK’s books and traders ramp up bets against the pound

Dividing global growth, balancing the UK’s books and traders ramp up bets against the pound

Making sense of the latest trends in property and economics from around the globe.

The IMF forecasts growth will hit 5.9% this year, a downward revision of 0.1%, according to its latest Financial Stability Report. Growth for 2022 was left unchanged at 4.9%. That’s a small revision masking some large cuts to some parts of the world (see chart). For the coming year, US growth was revised down 1% to 6%, the UK down 0.2% to 6.9%, while the Euro area forecast was notched up to 5%.

Advanced economies are the only income group expected to return to pre-pandemic trends by 2022 but the message from IMF chief economist Gita Gopinath was clear; risks to economic prospects have increased and policy trade-offs have become more complex.

Financial risks have been contained by policy support, masking vulnerabilities in the system. The IMF cited warning signs including soaring house prices and share prices surging beyond market fundamentals. 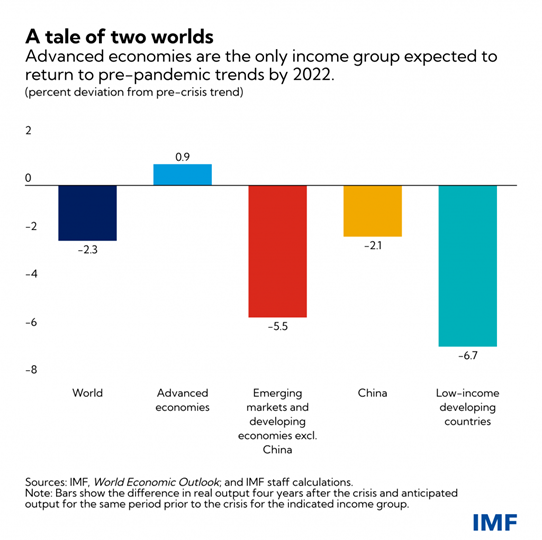 The UK economy is still the fastest growing advanced economy but the overall economic hit from the pandemic is set to be larger than its peers. The IMF forecasts the UK economy will remain 3% smaller in 2024 than it otherwise would have been, while other G7 economies will have bounced back.

New data published by the ONS this morning puts the recovery largely on track. The economy is estimated to have grown 0.4% during August led by a bounce back in consumer facing services. Meanwhile supply chain issues we talked about on Friday led to a 0.2% contraction in construction, leaving the sector 1.8% below its pre-pandemic size. The ONS highlighted shortages of steel, concrete, timber and glass.

Employers added another 207,000 employees to the payroll in September, the largest rise since 2014, according to data from the ONS, published yesterday. Recruiting on that scale just ahead of the wind up of the furlough scheme will be another factor weighed by Bank of England officials attempting to decide whether to dial back support for the economy.

There are now all sorts of signs that markets are expecting a rise in the base rate in the near-term. Several high street lenders dropped the price of tracker mortgages in recent days – see this 0.78% product from Yorkshire Building Society – which is usually a sure fire sign that the lenders believe interest rates are about to rise.

Meanwhile, traders are ramping up bets on a decline in sterling at the fastest rate in more than two years, according to Commodity Futures Trading Commission data analysed by Bloomberg. The logic here is an interest rate rise during prevailing levels of uncertainty will hit consumer sentiment and growth in the months ahead.

All-in-all, a red box of worrying news for the chancellor this morning, but he did receive some good news this week worth noting. The Institute for Fiscal Studies said Mr Sunak is on course to meet his target of balancing the budget by the middle of the decade.

That’s mostly due to a mixture of strong growth and the £28 billion of tax rises announced in the previous budget, however there remains a considerable amount of uncertainty over the future, which could lead the chancellor to change course, the group said. Key quote:

“If the economy does better than expected, it may even turn out that the £28 billion package of tax rises announced in the March 2021 budget will prove unnecessary for getting the public finances back to current budget surplus from 2023-24 onwards. If that happens, we can expect the chancellor either to abandon some of his proposed tax increases or to reduce other taxes. But if things go badly, those tax rises could need to be almost tripled for a current budget surplus by 2025-26.