Price growth in the Edinburgh property market looks set to maintain its momentum against the backdrop of high demand and limited supply.

Edinburgh has continued to benefit as an option for people looking for an alternative to London and other big cities, due to its scale and ease of access to the coast and countryside.

Average prices in Edinburgh grew by 2% in the third quarter, down from 2.3% in the previous three-month period. However, this was still the second-highest rate of growth in a third quarter since 2008.

The annual rate of change was 8.5% in the 12 months to September.

The Scottish capital regained its momentum quickly after the reopening of the market in June 2020 after more than two months of closure, and price inflation has been strong since. This has been due to a mix of local families looking to upsize, and the city’s ongoing ability to attract new arrivals from other parts of the UK keen to make a lifestyle change. 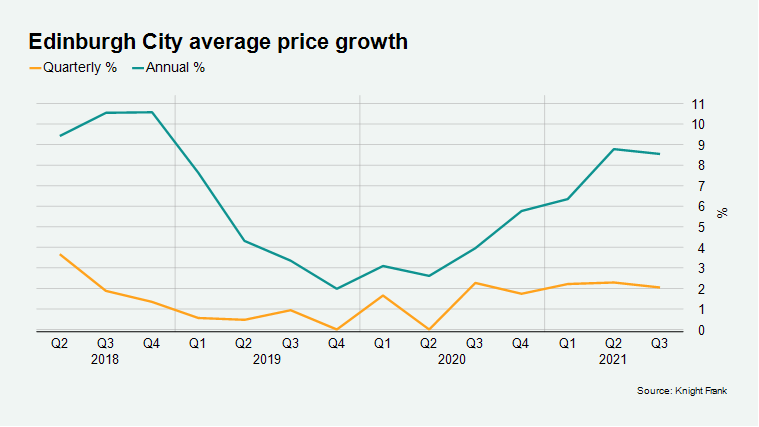 Houses continued to outperform flats in the third quarter as buyers prioritised space, with an average increase of 2.6% and 1.1% respectively. However, well-located flats are increasingly generating interest following the easing of lockdown restrictions and an increase in appetite for city centre living amongst buyers.

With supply tight, some prospective sellers have hesitated in listing their properties due to a lack of purchasing options, which has exacerbated the situation. The imbalance is not unique to Scotland, with low supply and high demand a characteristic of the autumn market across the UK.