Knight Frank’s Monthly UK Residential Market Update provides a snapshot of the health of the UK housing market, assessing its performance, and proving analysis of the latest economic developments.

The UK property market appeared to shrug off the end of the stamp duty holiday in September, with Halifax reporting a fourth month of rising house prices. A monthly increase of 0.9% pushed the annual rate of growth to 8.1% in October.

Nationwide put UK annual house price growth at 9.9% in October, compared to 10% a month earlier. Both indices said the cost of the average UK home reached a new high in October, with Halifax putting the figure at £270,027 and Nationwide at £250,311.

The end of the stamp duty taper in September also led to an increase in transactions as buyers rushed to make a maximum saving of £2,500.

Monthly UK transactions increased by 68% on a seasonally adjusted basis from 96,110 in August to 160,950 in September, according to HMRC.

October also delivered a Budget, although it contained little that was new for the residential property market. The Office for Budget Responsibility did however revise up its house price forecast and expects annual house price growth of 8.6% in 2021, compared with an expectation of 5.1% back in March.

The OBR has also taken a more optimistic view of 2022 (see chart), expecting growth to slow next year to 3.2% rather than falling into negative figures. Previously, it had anticipated a price fall of 1.7% next year. 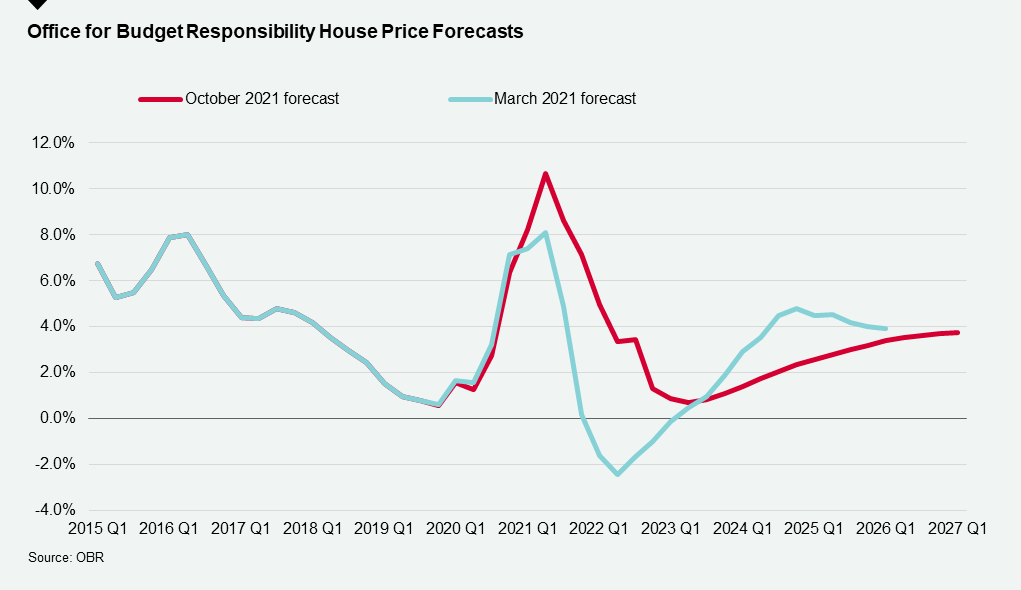 The OBR expects the annual volume of transactions to remain elevated, citing the ‘race for space’ as a key driver motivating higher spend on residential property.

While the Bank of England’s decision to keep interest rates at a historic low of 0.1% at its meeting this month surprised the City, a gradual increase in the cost of borrowing is expected over the next 12-months. However, with the bank rate at 0.75% before the onset of the pandemic, it is difficult to see a material impact on house prices in the short-term.

Average prices in prime central London increased by 1.2% in the year to October, which is a fairly unremarkable statistic on the surface.

However, what is perhaps more surprising is that the last time annual growth exceeded this figure was in September 2015.

The landscape has changed significantly over the last six years – politically, fiscally and in just about every other way since the pandemic struck. A succession of uncertainties has kept downwards pressure on prices since they peaked in summer 2015.

The prime property market in London now appears to be gradually emerging from this tumultuous period. September was the sixth consecutive month of annual growth in prime central London, something last achieved before the Brexit referendum in 2016.

In a similar way to the sales market, rental value growth in prime areas of London climbed to multi-year highs in October.

The flood of short-let properties onto the long-let market has dried up as lockdown restrictions have eased. At the same time, a number of owners attempted to sell during the stamp duty holiday, further driving down supply. Meanwhile demand has surged, triggered by the re-opening of universities and offices.

As a result, average quarterly rental value growth in prime central London was 4.2% in the three months to October. It is the highest figure since March 2011, a time when the rental market was shaking off the effects of the global financial crisis.

The country market has already achieved a record number of exchanges by calendar year, and October’s data suggests it will be a strong finish to 2021 for transactions.

Offers accepted were 73% above the five-year average in October (excluding 2020). While there are signs that the run of very strong price growth since the onset of the pandemic may be nearing its peak in the country market upwards pressure is still being brought to bear on prices by tight supply.

Market appraisals for sale were back in line with the five-year average last month at minus 2%. However, while instructions for sale were down 13% against the five-year average, an improvement on -26% in September, the cupboard remains relatively bare after a record sales period and it will likely be spring before a significant amount of new property is available to address this imbalance.