It’s the idea of stepping out of your apartment and into your favourite coffee joint, then taking a quick train ride to your office. It’s also the joy of meeting friends in the city after work, and later  heading out for a run in the park near home. The URA’s “Live, Work, Play” mantra – as Singaporeans are rediscovering – connects us to mixed-use neighbourhoods that provide for most of our needs, improving our quality of life.

Singaporeans are busy living and working, and keeping core business areas relevant to everyday living has long been a consideration for our urban planners. New business districts, improved infrastructure and better transport links all serve as opportunities to create a sustainable cohesion of residential, work, and rest areas all in one. Ultimately, creating lifestyle-focused environments improves the liveability of regeneration areas, which gets property investors excited about the increase in demand and prices.

Live, Work and Play has been so successful in the Marina Bay precinct – as shown by the rapid development of offices, condominiums and leisure hotspots – that plans are now underway to export the concept to outlying districts. One eagerly awaited master plan is the Greater Southern Waterfront – set for regeneration into a new major gateway for urban living. Planners envision a waterfront promenade that will seamlessly connect green and open spaces while extending our current city-line to improve accessibility between office and residential zones. 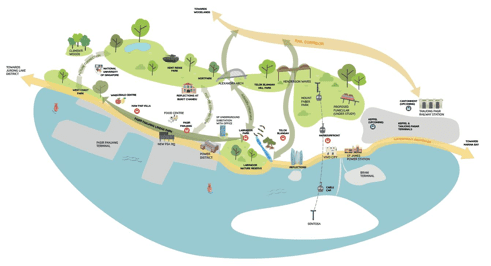 Projection of The Greater Southern Waterfront

Over the years, regeneration and transport upgrades have created new demand and underpinned residential market performance globally. And this effect has been particularly notable in London. One of the city’s largest, most successful regeneration schemes has been the Vauxhall, Nine Elms and Battersea (VNEB) Opportunity Area. An area described by Boris Johnson as having “huge potential to make a significant contribution to London’s economy.” And of this large stretch that runs from Lambeth Bridge all the way through to Chelsea Bridge alongside the River Thames – no address is more important than one at Battersea – right smack at the heart of London’s best regeneration project.

Battersea is traditionally a residential estate for Londoners, but more notably, where Prince William sent his children to study. With the ongoing regeneration masterplan, new residential projects and the £9 billion Battersea Power Station in the works, Battersea will soon offer over 1.25 million square feet of commercial space and 700,000 square feet of retail space to bring in more amenities that can enhance the quality of living in Battersea.

Today, Battersea is already a major transport hub, but it is set for further development to increase its connectivity to the rest of London. By 2021, the Northern Line Tube extension will cut journey times to Central London and the West End to just 15 minutes, making Battersea an ideal base for business and leisure travelers alike.

Battersea Power Station will also see the arrival of the new Apple European HQ. The relocation of a major institution like Apple will reinvigorate this historic area of Central London and lead the way for an employment catchment area of over 30,000 jobs. Apple’s 1.6million sq ft campus alone will house 1,400 employees.

“VNEB, with the arrival of Apple, is now a recognised office location for occupiers to consider with all the infrastructure to support global businesses”
– Ian McCarter, Knight Frank London West End Agency 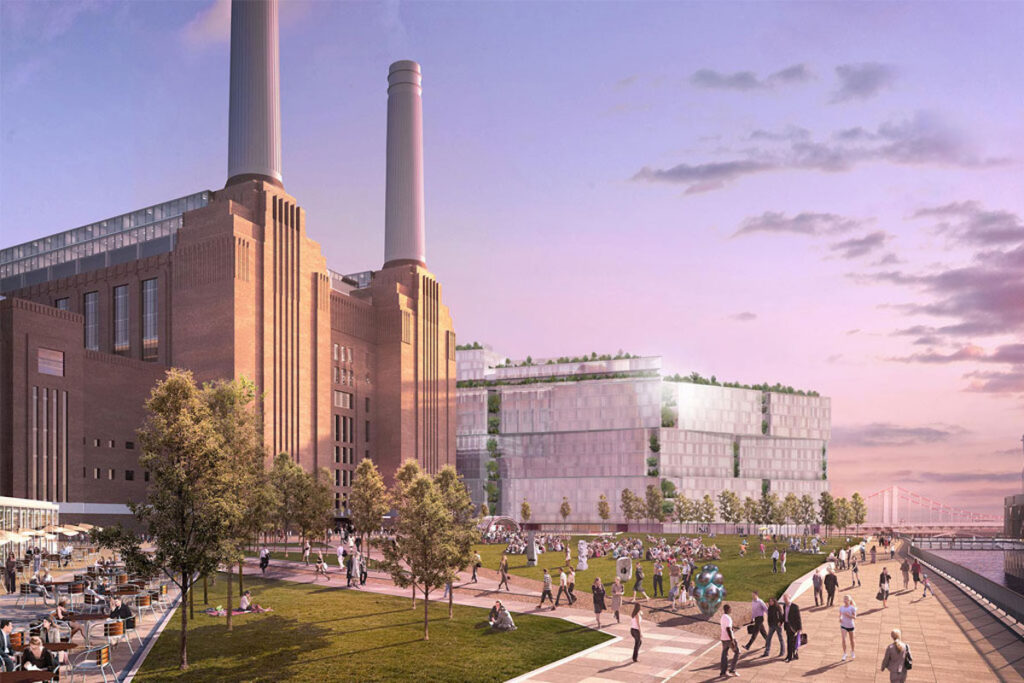 Soon to be home to the 3rd largest shopping center in London, Battersea Power Station will provide Londoners with recreational amenities like a cinema, events venue, health and fitness spaces, restaurants, bars and boutique shops.

Transport and commercial upgrades to Battersea are also taking place alongside dramatic improvements to the public realm. Residents can have a fun and relaxing weekend enjoying all that Battersea Park has to offer, including a soothing stroll along the renowned River Thames. On top of that, a new linear park will also snake through the whole regeneration project alongside the river – benefitting pedestrians and cyclists – linking Battersea Power Station to Vauxhall, and to the new US Embassy. 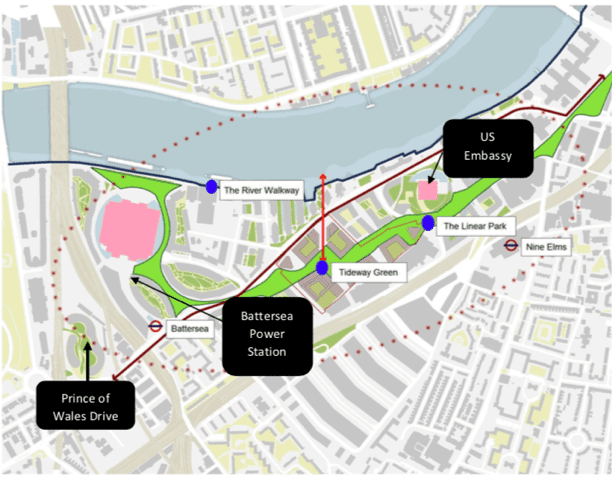 Imagine yourself living in a neighbourhood where regeneration transforms the way you live, work, and play. A neighbourhood, quite literally, fit for royalty. Lounging in your perfect private retreat away from the hustle and bustle of the city, you’ll be surrounded by 2.5 acres of beautiful landscaped gardens to help you truly unwind.

Peaceful haven and all, St Williams brand new development, Prince of Wales Drive sits in the perfect postcode to keep you connected to Central London, whilst nestled within the tranquil yet vibrant Battersea. With Battersea Power Station, Battersea Park and the upcoming tube station just a 5-minute walk away, Prince of Wales Drive aims to bring greater convenience through 100,000 square feet of commercial space within the compound to house retail spaces, offices, a cafe, and a nursery – all facilities to better service its residents. Here, you will get to truly enjoy the “Live, Work, Play” lifestyle envisioned for the development of Prince of Wales Drive.

To find out more about Prince of Wales Drive, simply chat with us on WhatsApp, and fill up the short form and one of our trusted Knight Frank advisors will be in touch with you shortly. Be sure to subscribe to our newsletter to stay updated on key insights on the international residential market.