Viewings on UK properties valued at more than £10 million are falling at the steepest rate in a decade due to international travel restrictions. However, the number of new buyers registering is growing by the most in ten years. The disparity underlines the extent to which pent-up demand for UK property is building overseas, thanks in part to the success of the country’s vaccine roll-out

Domestic demand for UK property has been turbo-charged by three national lockdowns.

Annual price growth climbed to 7% in December, with the stamp duty holiday playing a supporting rather than a central role.

Travel restrictions mean demand is currently building in a similar way across the rest of the world.

The £10 million-plus property market provides a useful barometer for this trend, with overseas buyers accounting for between two-thirds and three-quarters of sales in recent years.

Demonstrating how overseas demand has grown despite tight restrictions around travel, the number of new prospective buyers registering in the price bracket increased by 109% in the year to January compared to the previous 12-month period. It was the highest such rise in more than 10 years and underlines how the decisive general election result in December 2019 boosted global demand for UK property.

Over the same period, the number of viewings fell by 36% due to the pandemic, the steepest such decline in a decade, as the chart below shows 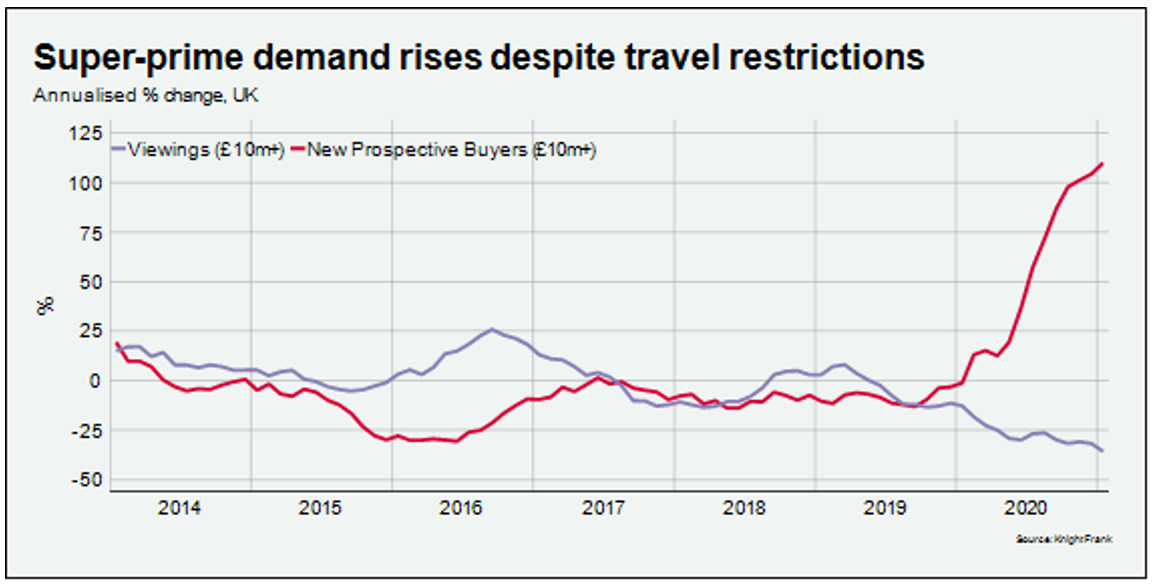 “Demand is as strong as ever so there is some frustration among overseas buyers who are unable to travel to the UK,” said Paddy Dring, global head of prime sales at Knight Frank. “The challenge is the quarantine rules. When the restrictions are relaxed we expect demand to return very quickly. The message for anyone thinking of selling is clear, be ready now to beat the rush when the flights resume.”

“For international buyers, there is a huge disparity between the desire to buy and the ability to view,” said Tom Bill, head of UK residential research at Knight Frank. “Many have positioned themselves to act quickly once rules are relaxed and the anecdotal evidence is growing that the success of the UK’s vaccine roll-out is an important consideration for people looking to work, study and live in the UK across all price brackets.”

The other result of the successful vaccine roll-out is a rising pound, which will also be a consideration for international buyers. On Wednesday it was trading at $1.42 against the US dollar as it moves closer its pre-EU referendum level.

However, the flat performance of prices in prime central London in recent months will limit any disruption from a 2% surcharge for overseas buyers that will be introduced in April, as analysed in more detail here.

Rory Penn, head of the private office at Knight Frank, said the figures demonstrated the market’s resilience during the pandemic.
“As restrictions lift we are expecting super-prime sales activity for both houses and apartments to increase,” Rory said. “As ever, best-in-class and market-priced stock will perform well.”