From Challenges to Opportunity: How London’s Silicon Roundabout can be an investor’s Post-COVID Opportunity

From Challenges to Opportunity: How London’s Silicon Roundabout can be an investor’s Post-COVID Opportunity

Capital cities like London have underwent severe shock from the global pandemic due to the synergic relationship between the city’s urban layout and its commuters, which have recently been put in question. City de-population and high vacancy rates are some alarming observations made in 2020, but research by Knight Frank leads us to believe that these are only temporary occurrences.

“The Covid-19 Pandemic is creating exciting opportunities for dynamic, resilient urban hubs such as London to evolve and meet the future needs of business, investors, workers and residents”

On top of London’s fundamental advantage of having a disproportionately young workforce and a deep-rooted sense of British culture, its proactive government is on the ball to galvanise these challenges faced as opportunities to better reshape the city. As the global economy slowly returns to a stable growth, London’s recovery is ultimately accelerated by its key strengths.

We are witnessing an exciting time where global hotspots like London are giving much consideration to the shifts in lifestyles. The UK government has pledged to allocate significant stimulus measures to kickstart growth in line with some common themes promoted by academic institutions and research organisations. Some key themes include:

Looking at potential opportunities for the post-COVID economy, we witness a massive acceleration in technology adoption in both corporate and personal life. And this signals good news for London.

London has been ranked as having one of best environments for start-up ecosystems to thrive in 2020, mainly due to its deep access to capital, investment, experience and global talent. One of London’s strongest cards is also its strategical location to other global cities, allowing them to do business with other major tech epicentres in US and Asia during their working hours. 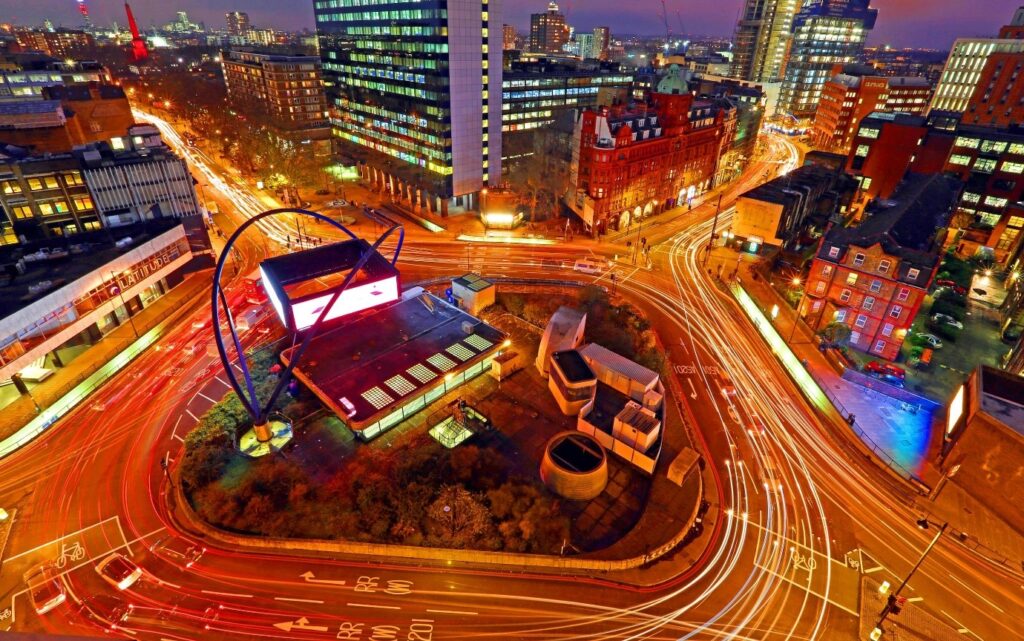 Located in Shoreditch, London’s Silicon Roundabout have been attracting foreign investments. Notable contributions come from Venture Capital (VC) firms like Softbank and capital-rich companies like Amazon, which raised £6.7 billion in just 2020 alone. It is evident that there is a burgeoning interest in London’s tech scene that is gaining massive traction from foreign investors (source). 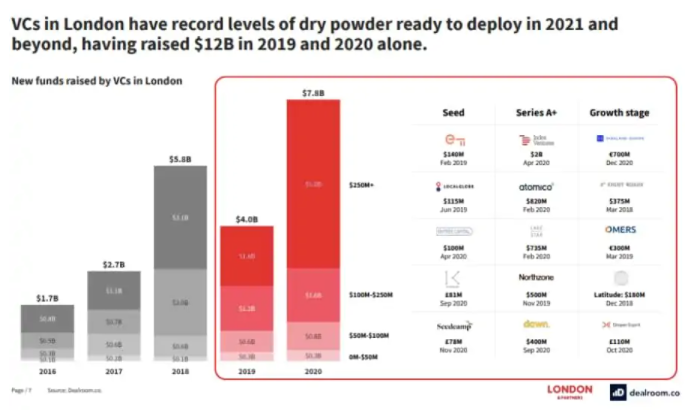 London’s influence in the tech scene is further solidified when giants like Facebook, Google and Amazon selected Silicon Roundabout to establish their HQ.

Promptly, London’s tech epicentre is becoming Europe’s answer to the collective change in behaviour, spearheading the era of technology and data hubs. Complemented by a nearby extensive transportation network and by quality amenities within the vicinity, the neighbourhood is re-imagined into life suited for modern demands.

Heavy public and private investment projects continue to spur Shoreditch’s growth ahead, making the borough’s property markets one of the fastest growing property in London. In review of changing collective behaviours, businesses and professionals are opting to make their new homes in the East End. 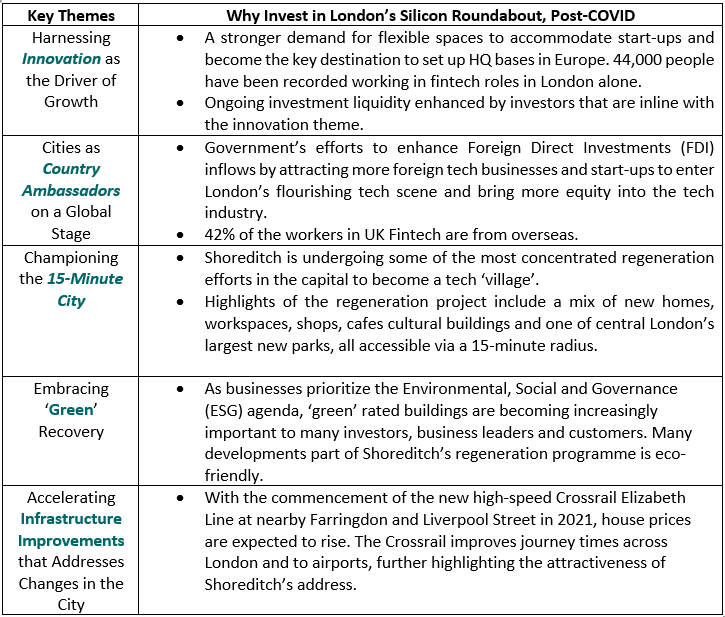 Even with the area’s digital renaissance, many aspects of the Shoreditch neighbourhood remain vastly unchanged, where traditional markets and well-loved restaurants still attract crowds into the neighbourhood.

A New Beacon for London’s Tech City – Introducing The Arc 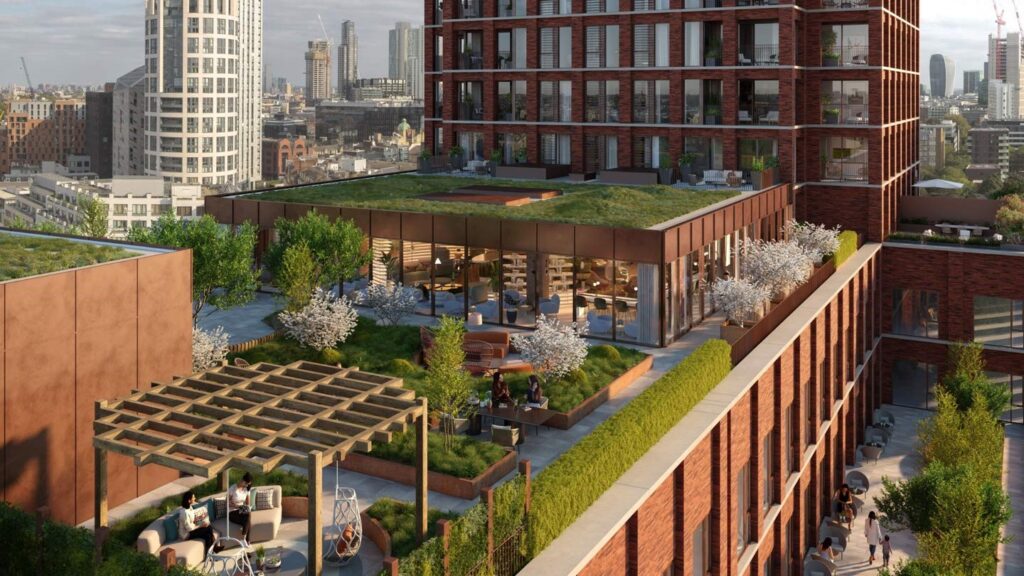 A red brick podium building echoing the industrial spirit placed in the crossroads of 5 dynamic districts, The Arc is a 22-tower residential building developed by Ghelamco that offers 100 new build homes at just a 7-minute walk from the Silicon Roundabout.

Living at The Arc ensures experiencing every side of London’s complex character. A location that is vibrant with Old Street’s tech-focused innovation, well-complemented by Shoreditch’s colourful creativity and Clerkenwell’s charming, village-like atmosphere and the ancient boundaries of the Square Mile. An exciting community awaits at the crossroads of The Arc, all easily accessible by feet.

Located in Central London, the development boasts great transport links, including the Northern Line and the newly introduced Crossrail Elizabeth Line that directly cuts through the East to the West.

With clear long-term strategies to grow Shoreditch into a liveable tech village on a global scale, accessible and high-quality amenities are in line to complement the lifestyle demands within the borough.

Today, 44,000 people are working in London’s fintech industry with a forecasted growth in this demographic. The Silicon Roundabout is anticipated to be the next key residential location in London.

Within Central London, Knight Frank has forecasted a cumulative 25% price growth from 2020 – 2025 against a strong housing market backdrop (source).

Knight Frank is forecasting a 13% price growth from 2019 – 2024’s forecast based on the current political backdrop, with East London being one of the most important growth drivers by 2030 (source).

Talk to Us. We’d Love to Help.

Prices at The Arc EC1 starts from £728,000*. If you’ve enjoyed this read and would like to learn more about one of London’s best performing areas, we’d love to help. Simply contact us and our trusted advisors will respond shortly.