August is rarely an appropriate moment to evaluate the status of the prime London property market.

It is even truer this year, given the backdrop of a tapering stamp duty holiday, the erratic relaxation of international travel rules and, for many, the determination to take time off.

However, based on data for the last three months we can draw several conclusions about what is likely to come next.

The first is that the market has largely shrugged off the impact of the stamp duty holiday.

Following the substantial winding down of the holiday in June, the number of sub-£2 million exchanges in July was 30% below the same month in 2019. By August, the equivalent decline had narrowed to 5%, Knight Frank data shows.

Above £2 million, a section of the market where activity was less affected by the maximum £15,000 saving, exchanges were down by 5% versus July 2019 and 3% compared to August 2019. For higher-value properties, the stamp duty holiday was an opportunity to save £15,000 but the urgency around the deadline was less acute, as the below chart demonstrates. 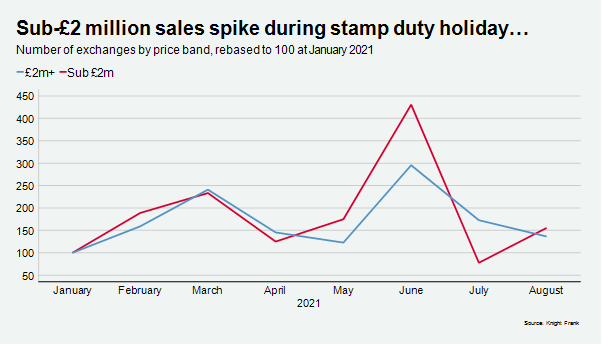 The predictable result, as the autumn market approaches, is a tightening of supply, particularly below £2 million, due to the frenetic pace of activity in the run-up to June.

The number of market valuation appraisals below £2 million has dipped since March as activity was squeezed into the months leading up to the end of the stamp duty holiday. 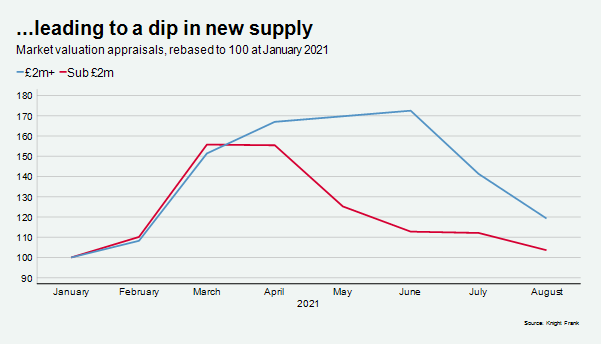 To underline this, the overall number of market valuation appraisals in London below £2 million in the year to August 2021 was 27% higher than the equivalent period in 2019.

Meanwhile, demand remains high, with the number of new prospective buyers registering in July and August in London 21% above the five-year average.

The key question, therefore, is by how much will supply pick up this autumn to meet the strong level of demand. It will naturally increase due to seasonality, the positive economic backdrop, the benign interest rate environment and the return of sellers put off by the frenetic pace of activity during the SDLT holiday, as discussed here.

However, while the summer represented a natural pause for many, some may wait until Christmas to assess the social and economic landscape as government stimulus measures and Covid restrictions wind down. It means needs-based buyers and sellers may account for a higher proportion of activity over the next four months.

Either way, the number of offers accepted in July and August was 34% above the five-year average, indicating the strength of the sales pipeline.

Average prices in the year to August rose by 0.5% in prime central London and by 2.9% in prime outer London. For PCL, we forecast a rise of 2% this year and 7% for 2022 as international demand kicks in. In POL, we expect 4% growth this year and next.

The market was in somewhat of a holding pattern in August. We can confidently predict a strong end to the year, just less frenetic than the first six months and to some degree contingent on supply levels.